What Does AFF Mean?

The abbreviation AFF has a number of common meanings, which are used widely both online and off. The most common definition searched for is "Adult Friend Finder." AFF also means "Affirmative," "Advanced Fighting Fantasy" and "Away From Forum." Here is a little more information about each definition of AFF. (Examples of use can be found below.)

The most common definition of AFF searched for online is "Adult Friend Finder." AFF is an adult-oriented social network and dating service, which was founded in 1996. It is said to be one of the most popular online destinations for individuals, couples and groups looking for casual sexual encounters.

Another common definition of AFF is "Affirmative." Originally a term used in radio conversations to mean "Yes," AFF is now widely used in text-based communications to indicate agreement or consent.

In gaming, AFF is a role-playing game, based on the Fighting Fantasy gamebooks. AFF was first released in 1989, and re-released as a second edition in 2011.

AFF is used in online forums to indicate that a user is currently away or offline.

Here is a video summarizing AFF:

"Adult Friend Finder" is the most common definition for AFF on online dating sites, as well as in texts and on adult chat forums.

"Affirmative" is another common definition for AFF.

"Advanced Fighting Fantasy" is a common definition for AFF on gaming apps, such as Discord and TeamSpeak.

"Away From Forum" is another definition for AFF.

When I write AFF, I mean this: 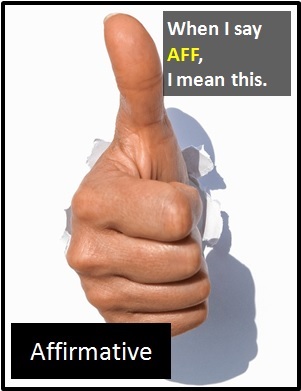 Examples of AFF in Sentences

Here's an example of AFF being used in conversation:

An Academic Look at AFF

When used with the meanings "Adult Friend Finder," "Advanced Fighting Fantasy" and "Away From Forum," AFF is pronounced using its individual letters (i.e., "Ay Eff Eff"). Therefore, it is classified as an initialism abbreviation. Initialisms are different to acronyms, which are spoken like words.

Example of AFF Used in a Text