What Does ACK Mean?

The interjection ACK is used to express "Distaste, Dismay or Mild Alarm." It can also mean "Acknowledge." Here is more information about each of these definitions of ACK. Examples of use can be found below.

In internet forums and in text-based messaging, ACK is typically used to indicate distaste, dismay or alarm at something that someone has typed. This usage of ACK is believed to stem from the term's similarity with the word "Yuck," which is commonly used to express distaste.

ACK is also used to mean "Acknowledge," as in to confirm receipt or understanding of a message. This way of using ACK is probably based on military and law-enforcement usage of the word "Acknowledge" in communications. It may also be based on data communication protocols, many of which are "ACK based," meaning that they automatically acknowledge receipt of messages by sending a coded reply.

When I write ACK, I mean this: 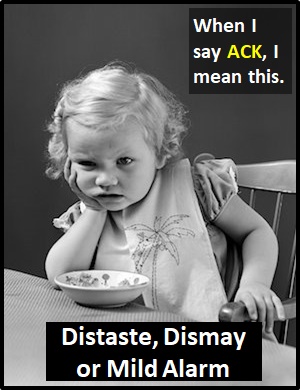 Examples of ACK in Sentences

Here are examples of ACK being used in conversations:


(Here, ACK indicates mild alarm and is an expression of distaste.)

An Academic Look at ACK

When used to express surprise or disgust, ACK is an interjection. An interjection is not grammatically related to any other part of the sentence. It is included in a sentence (usually at the start) to express a sentiment such as surprise, disgust, joy, excitement, or enthusiasm. In formal writing, interjections are offset from the surrounding words with commas. For example:

When used to mean "Acknowledge," ACK is used as a standalone declarative sentence (i.e., a statement). In other words, it is not used as another part of speech within a wider sentence.

Before the digital era, we would probably have said something like "Yuck" instead of using ACK to express disgust.

Example of ACK Used in a Text

ACK
Help Us To Improve Cyber Definitions
Please tell us using this form.