What Does ACID Mean?

ACID means "LSD". The term ACID is another name for the psychedelic drug LSD. The name of the extremely powerful hallucinogen comes from the expansion of the abbreviation LSD (Lysergic ACID Diethylamide). Synthesised in 1938 by Swiss scientist Albert Hoffman, ACID is normally measured in micrograms. The substance is often ingested on sugar cubes or tiny pieces of paper. The experience of taking ACID is known as a ‘trip’.

When I write ACID, I mean this: 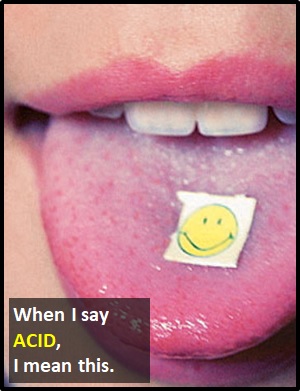 ACID, is a psychedelic drug known for its psychological effects.

Examples of ACID in Sentences

Here are examples of ACID being used in conversations:

An Academic Look at ACID

ACID is typically used as a noun (i.e., a naming word). For example:

(Here, ACID is being used as a noun.)

The term ACID existed as slang for the psychedlic drug, LSD, before the digital era.

Example of ACID Used in a Text

ACID
Help Us To Improve Cyber Definitions
Please tell us using this form.