What Does WYF Mean?

WYF is often used as a question to determine which particular thing or person someone likes best.

WYF is also used to question a person's place of birth or residence.

First held in November 2017, the "World Youth Forum" is an Egyptian initiative designed to allow young people from all over the world to exchange views and make recommendations to decision-makers and other influential figures. The WYF has since become an opportunity for young people to network and to engage with top policymakers, including heads of state and business leaders.

WYF means "What's Your Favorite?" This is a common definition for WYF on Snapchat, WhatsApp, Facebook, and Twitter.

WYF also means "Who's Your Favorite?"

WYF also means "Where You From?"

When I write WYF, I mean this: 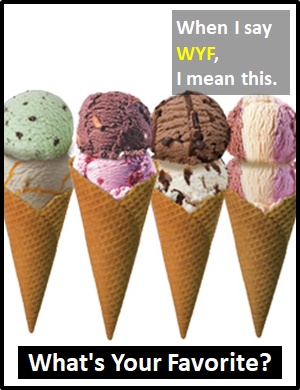 WYF also means "Who's Your Favorite?," "Where You From?," and "World Youth Forum."

Examples of WYF in Sentences

Here are examples of WYF being used in conversations:

(Here, WYF means "Who's Your Favorite?")

An Academic Look at WYF

WYF usually plays the role of an interrogative sentence (i.e., a question), but it is commonly seen without a question mark. In other words, it can be written "WYF?" or "WYF".

As it is pronounced using its individual letters (i.e., "Dblyoo Why Eff"), WYF is classified as an initialism abbreviation. Initialisms are different to acronyms, which are spoken like words.

Example of WYF Used in a Text

WYF
Help Us To Improve Cyber Definitions
Please tell us using this form.