WUUP2 means "What are you up to?". WUUP2 is used to ask "What are you doing," "What's going on?" or even "How are you?" The term is thought to have originated on the now discontinued MSN messaging service. (NB: Nowadays, the term WUU2 is more commonly used.)

WYD (What are you doing?) and WRU@ (Where are you at?) are alternative ways of asking the same question.

When I write WUUP2, I mean this: 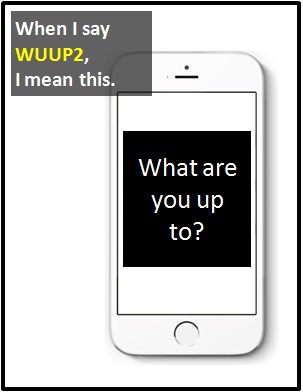 What are you up to?

Examples of WUUP2 in Sentences

Here are examples of WUUP2 being used in conversations:

An Academic Look at WUUP2

WUUP2 plays the role of an interrogative sentence (i.e., a question), but it is commonly seen without a question mark. In other words, it can be written "WUUP2?" or "WUUP2".

Before the digital era, we might have said something like "what are you doing?" instead of WUUP2.

Example of WUUP2 Used in a Text

WUUP2
Help Us To Improve Cyber Definitions
Please tell us using this form.