What Does WSP Mean?

The abbreviation WSP is used widely online with the meaning "What's Up?". It is also used to refer to the "WhatsApp" messaging app and as an abbreviation meaning "White Skin Privilege." Here's more information about each of these definitions of WSP.

The principal use of the abbreviation WSP is as a question. In this context, WSP means "What's Up?," as in "What's happening?," "What's new?," or "How are things with you?".

The phrase "What's Up?" is widely used as a greeting. Other forms of abbreviating it include:

Because it means "What's Up?", WSP has also come to be used to refer to the the WhatsApp messaging app.

WhatsApp is also abbreviated as whats@pp.

In a 1967 pamphlet entitled "The White Blindspot", Noel Ignatin and Ted Allen, coined the term "White Skin Privilege" to refer to the societal privilege enjoyed by some white people over non-white people in certain societies.

The concept of "White Skin Privilege" is now typically referred to as "White Privilege."

When I write WSP, I mean this: 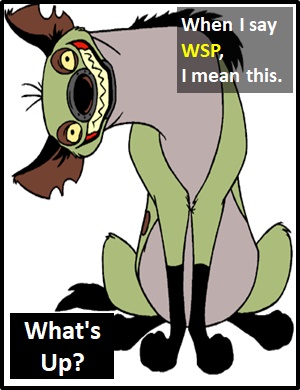 "WhatsApp" (Messaging App) is another common definition for WSP.

"White Skin Privilege" is another definition for WSP.

Examples of WSP in Sentences

Here are examples of WSP being used in conversations:

An Academic Look at WSP

Whether it is used to mean "What's Up?," "WhatsApp," or "White Skin Privilege," WSP is classified as an initialism abbreviation, as it is pronounced using its individual letters (i.e., "Dblyoo Ess Pee").

Example of WSP Used in a Text