What Does URBAN Mean?

URBAN means "Of, Relating To, or In a Town or City."

When talking about populated areas, the term URBAN is widely used, but poorly defined. As explained in this blog post by the World Bank, the criteria for defining URBAN differ widely throughout the world. As explained in this joke, the criteria for defining URBAN can sometimes be quite simple: In general chat about URBAN, people are usually referring to URBAN CONTEMPORARY MUSIC, an umbrella term for styles of Black music that have emerged and gained traction since the 1970s, including soul, hip hop, rap, and R&B.

When I write URBAN, I mean this: 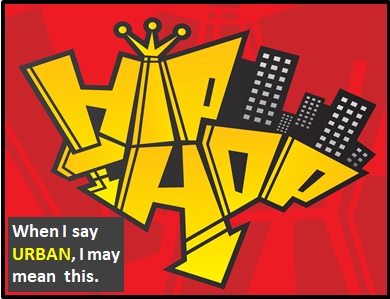 Hip Hop is a style of URBAN music.

An Academic Look at URBAN

URBAN is typically used as an adjective (i.e., a describing word). For example:

Example of URBAN Used in a Text