What Does UHF Mean?

UHF (Ultra-High Frequency) is the International Telecommunication Union (ITU) designation for radio frequencies in the 300 MHz to 3 GHz range. These frequencies are used for television broadcasting, cell phones, satellite communication including GPS, personal radio services including Wi-Fi and Bluetooth, two-way radios, cordless phones, and many other applications.

Radio waves with frequencies above the UHF band fall into the SHF (Super-High Frequency) or microwave frequency range. Lower frequency signals fall into the VHF (Very-High Frequency) range. UHF radio waves propagate mainly by line of sight (the signal travels in a straight line between transmitter and receiver), and they are blocked by hills and disrupted by large buildings.

When I write UHF, I mean this: 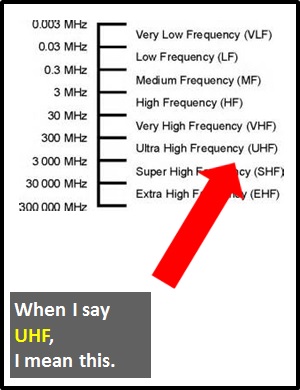 The image shows where UHF fits in the frequency spectrum.

Examples of UHF in Sentences

Here is an example of UHF being used in a conversation:

An Academic Look at UHF

UHF is an initialism abbreviation. This means it is pronounced using its individual letters (i.e., Yu Aich Eff). Initialisms contrast with acronyms, which are spoken like words.

Example of UHF Used in a Text

UHF
Help Us To Improve Cyber Definitions
Please tell us using this form.