What Does UDI Mean?

A UDI (an Unidentified Drinking Injury) is typically found the morning after a heavy drinking session. The injured party usually has no recollection whatsoever about how the injury occurred.

The "Hangover" series of films offers lots of good examples of UDIs (the most obvious example being when dentist "Stu Price" wakes up to find a tooth missing). All the films are based on determining how UDIs occurred.

When I write UDI, I mean this: 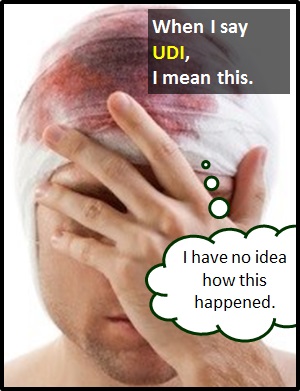 This image shows a man with an injury sustained while drunk. He has no idea how the injured happened.

Examples of UDI in Sentences

Here are some examples of UDI being used in sentences:

An Academic Look at UDI

UDI is an initialism abbreviation. This means it is pronounced using its individual letters (i.e., Yu Dee Aye). Initialisms contrast with acronyms, which are spoken like words. UDI is typically used as a noun.

Example of UDI Used in a Text

UDI
Help Us To Improve Cyber Definitions
Please tell us using this form.