What Does TP Mean?

The abbreviation TP means "Toilet Paper," "Think Positive," "Teleport," "Teaching Point," and "Traffic Program." Here is more information about each of these definitions of TP, together with examples of use.

TP is widely used in online chat and text messaging with the meaning "Toilet Paper." (Especially during the initial stages of the coronavirus pandemic when toilet paper was in short supply due to covidiots.)

TP is also widely used with the meaning "Think Positive," as an instruction to be optimistic and focus on the good in any given situation. For example:

In online gaming, TP is used with the meaning "Teleport" to refer to the ability of a character to instantaneously travel from one location to another.

In education, TP means "Teaching Point." In this context a TP is a key aspect of a lesson which must be imparted to the class or individual student. TPs are often pre-planned, but may also arise during interaction between the teacher and audience.

On in-vehicle music systems, TP means "Traffic Program." This is a mode which restricts the system to finding only those radio stations that broadcast traffic bulletins.

"Think Positive" is another common definition for TP.

In online gaming, "Teleport" is a common definition for TP.

In education and training, "Teaching Point" is a common definition for TP.

When I write TP, I mean this: 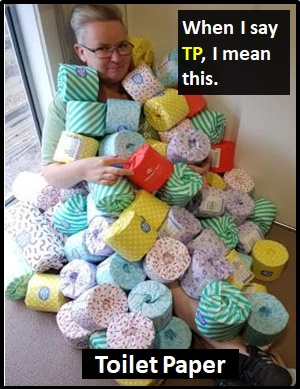 An Academic Look at TP

As it is pronounced using its individual letters (i.e., "Tee Pee"), TP is classified as an initialism abbreviation. However, TP is also an acronym, as it is an abbreviation spoken like a word (i.e., "Teepee").

When used with the meaning "Toilet Paper," TP is typically used as a noun (i.e., a naming word). However, it can also be used as a verb. For example:

When used with the meaning "Think Positive," TP is typically used as an imperative (i.e., an order). It can be followed by a period (full stop) or an exclamation mark, depending on the forcefulness of the command (i.e., it can be written as "TP." or "TP!"). However, for purposes of brevity in text-based messaging, punctuation such as exclamation marks, question marks, and even periods are often omitted.

Example of TP Used in a Text

TP
Help Us To Improve Cyber Definitions
Please tell us using this form.