What Does TM Mean?

The abbreviation TM is widely used to mean "Trust Me," "Text Message," "Tomorrow," and "Too Much." TM is also recognized as an abbreviation of "Trademark." It is also used to refer to "Transcendental Meditation."

Here's more information about each of these definitions of TM, with examples of use.

TM is used to mean "Trust Me" to reassure the recipient that the sender is right and to add emphasis to a message. For example:

TM is used with the meaning "Text Message," when referring to any type of text-based instant messaging service, such as SMS, WhatsApp or Facebook Messenger. For example:

TM is also used with the meaning "Too Much." In this context it is typically used humorously to describe a person or their actions, or to express admiration or disgust. For example:


"Too Much" is the title of a 2019 song from Canadian singer Carly Rae Jepsen.

TM is widely used, both online and offline, to mean "Trademark." A trademark is a recognizable sign, symbol or name legally registered by a company, which means it cannot be used by anyone else. For example: In 2016 the Icelandic government launched a lawsuit against the British frozen food chain, Iceland. They claimed their country was unable to promote itself because the grocery company owns the Trademark registration for the name "Iceland."

TM is sometimes used to refer to "Transcendental Meditation." TM is a form of meditation created by Maharishi Mahesh Yogi in India, in the mid-1950s. The TM technique is one of the most widely practiced forms of meditation.

When I write TM, I mean this: 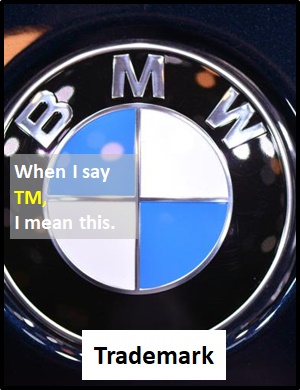 TM also means "Trust Me," "Text Message," "Tomorrow," "Too Much," and "Transcendental Meditation."

"Text Message" is another common definition for TM.

TM also means "Too Much."

TM is widely used with the meaning "Trademark."

An Academic Look at TM

As it is pronounced using its individual letters (i.e., "Tee Emm"), TM is classified as an initialism abbreviation. Initialisms are different to acronyms, which are spoken like words.

When used with the meaning "Too Much" TM can be used as an interjection (i.e., a word used to express feeling or sudden emotion) or an adjective (i.e., a describing word). For example:


(Here, TM is being used as an interjection.)

Example of TM Used in a Text