What Does THICC Mean?

The word THICC (pronounced "Tick") is used to describe a person (usually a woman) with a body that is "Big, Curvy and Sexy." Typically, a woman who is THICC will have an hourglass or pear-shaped figure, with particularly large buttocks and thighs. THICC is generally considered a compliment and is intended to show appreciation for bodies that do not conform with the "tyranny of thinness."

The term THICC has been in use since at least the early 2000s. It was most commonly used in Black American culture, but became very popular in 2017, when pop star Rihanna's fans used it to refer to her new figure.

Here is a video summarizing "THICC": Check out the original "THICC" meme by Anthony Fantano.

When I write THICC, I mean this: 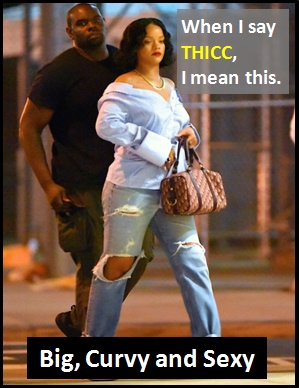 Examples of THICC in Sentences

Here are examples of THICC being used in conversations:

An Academic Look at THICC

THICC is a neologism (i.e., a newly coined word or term which has emerged into everyday usage). Some neologisms are formally accepted into mainstream language (at which point, they cease to be neologisms) and some wither until they can longer be considered everyday terms. A neologism can be: THICC is typically used an an adjective (i.e., a describing word). For example:

Example of THICC Used in a Text

THICC
Help Us To Improve Cyber Definitions
Please tell us using this form.