What Does TEA Mean?

TEA means "Gossip." The use of the word TEA to mean "Gossip" probably originated in the southern United States, where it was the custom for ladies to gather in the afternoon to drink tea and exchange rumors and stories.

When I write TEA, I mean this: 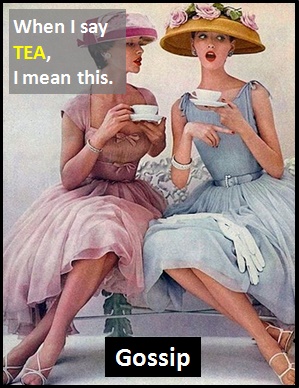 Sipping the TEA is almost as much fun as spilling it.

Examples of TEA in Sentences

Here are examples of TEA being used in conversations:

An Academic Look at TEA

TEA is typically used as a noun (i.e., a naming word). For example:

Example of TEA Used in a Text

TEA
Help Us To Improve Cyber Definitions
Please tell us using this form.