What Does TCTC Mean?

TCTC (Too Close To Call) is used to describe a situation where it is almost impossible to predict what the result might be.

Although TCTC is typically used in a sports or competition context (such as races, games or boxing bouts), it can also be applied more widely to other topics of conversation (e.g., political debates or social situations).

When I write TCTC, I mean this: 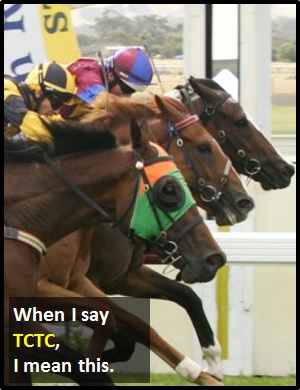 The image shows a race that is too close to call.

Examples of TCTC in Sentences

Here are examples of TCTC being used in conversations:

An Academic Look at TCTC

TCTC is an initialism abbreviation. This means it is pronounced using its individual letters (i.e., Tee See Tee See). (Initialisms contrast with acronyms, which are spoken like words.)

TCTC is used as a standalone declarative sentence (i.e., a statement), which translates best as "It is too close to call." In other words, it is not used as another part of speech within a wider sentence.

Before the digital era, we might have said something like "It is anyone's guess" or "I'd say that is 50-50" instead of TCTC.

Example of TCTC Used in a Text