What Does S/O Mean?

S/O means "Shout Out" or "Significant Other."

The term "shout out" means a mention, a credit, or a greeting. The term is commonly used by radio DJs or live on-stage performers. In other words, to give someone a "shout out" is to acknowledge them for something (usually for their help). Giving a shout out is a common way of showing appreciation, but not all "shout outs" show appreciation. A "shout out" might be just a mention in a public setting.

In a social-media context, a "shout out" refers to tagging someone (i.e., including their name with a link to their site or social-media account).

Here's a short video explaining how to use S/O:

"Significant Other" is another common definition for S/O

When I write S/O, I mean this: 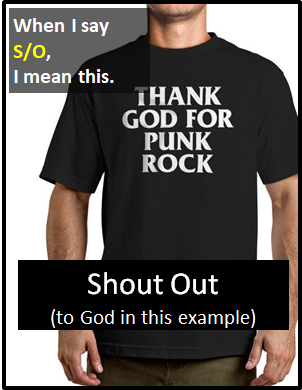 "Shout out" is the most common definition for S/O, but it can also mean "significant other."

Examples of S/O in Sentences

Here are examples of S/O being used in conversations:

(Here, S/O means "shout out." It means "Thanks for recognizing me.")

(Here, S/O means "significant other" Toni is not assuming the gender of Jordan's partner or that Jordan is married.)

An Academic Look at S/O

In both meanings, S/O functions as a noun. When it means "shout out," S/O is a compound noun (i.e., a noun made up of more than one word). When S/O means "significant other," it is noun phrase comprising an adjective and a pronoun. Of note, "shout out" is increasingly being written as one word, i.e., "shoutout."

Before the digital era, we might have said something like "appreciation" or "kudos" instead of "shout out" and "wife," "husband," or "spouse" instead of "significant other."

Example of S/O Used in a Text

S/O
Help Us To Improve Cyber Definitions
Please tell us using this form.