SWIY means "Someone Who Isn't You." The abbreviation SWIY is commonly used to express contempt or a lack of interest. SWIY is often used as a "put down" and indicates that the sender isn't interested in the company of the recipient.

When I write SWIY, I mean this: 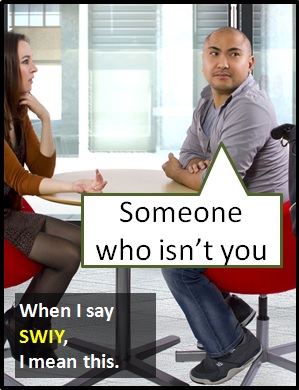 "I would really rather be with someone else."

Examples of SWIY in Sentences

Here are examples of SWIY being used in conversations:

An Academic Look at SWIY

SWIY is an initialism abbreviation. Technically, this means it is pronounced using its individual letters (i.e., Ess Dublyu Eye Why), but as this is harder to say than "Someone Who Isn't You," it is not often uttered using its letters. In other words, the abbreviation SWIY is for efficiency in writing and not efficiency in speech.

Before the digital era, we might have just said "Someone Who Isn't You," or something like "Anyone else but you," instead of using the abbreviation SWIY.

Example of SWIY Used in a Text

SWIY
Help Us To Improve Cyber Definitions
Please tell us using this form.

NOLY (No One Likes You) OOYL (Out Of Your League) NYT (Not Your Type) RUKM (Are You Kidding Me?) SWIM (Someone Who Isn't You)