What Does SWIR Mean?

SWIR means "So Wrong, It's Right." The abbreviation SWIR is used with the meaning "So Wrong It's Right" to describe guilty pleasures or something that appears so strange or outrageous that it is surprisingly attractive. (In this latter context, SWIR is often applied to a new fashion or hairstyle.)

Of interest, in 2012, American punk rock band Dollyrot released a song entitled "So Wrong, It's Right."

When I write SWIR, I mean this: 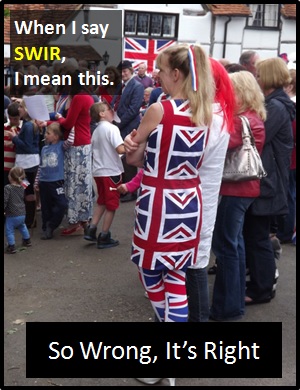 This suit is SWIR!

Examples of SWIR in Sentences

Here are examples of SWIR being used in conversations:

An Academic Look at SWIR

As it is pronounced using its individual letters (i.e., "Ess Dublyoo Eye Ar"), SWIR is classified as an initialism abbreviation. Initialisms are different to acronyms, which are spoken like words.

Before the digital era, we might have just said "So Wrong It's Right" or something like "It's naughty, but nice," instead of using SWIR.

Example of SWIR Used in a Text

SWIR
Help Us To Improve Cyber Definitions
Please tell us using this form.

CUCKOO (Crazy) WFM (Works For Me) TMTH (Too Much To Handle)