What Does SUV Mean?

SUV means "Sports Utility Vehicle." The term SUV refers to large vehicles that typically have four-wheel-drive capabilities, making them suitable for off-road driving. Derived from military vehicles, they were marketed towards families as an alternative to typical family cars. They are also frequently used by people who live or work in areas with tough terrain, such as farms, forests, deserts or snow-covered ground.

SUV means "Sport Utility Vehicle." This is the most common definition for SUV in general conversation, as well as on Snapchat, WhatsApp, Facebook, and Twitter.

When I write SUV, I mean this: 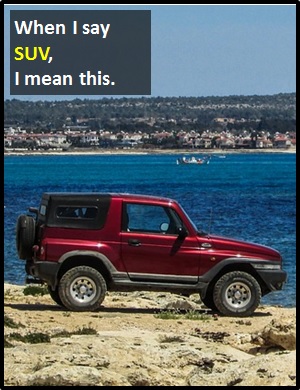 Examples of SUV in Sentences

Here are examples of SUV being used in conversations:

An Academic Look at SUV

As it is pronounced using its individual letters (i.e., "Ess Yu Vee"), SUV is classified as an initialism abbreviation. Initialisms are different to acronyms, which are spoken like words.

SUV is typically used as a noun (i.e., a naming word).

Example of SUV Used in a Text

SUV
Help Us To Improve Cyber Definitions
Please tell us using this form.