What Does STBX Mean?

The abbreviation STBX is typically used with the meaning "Soon-To-Be Ex" to refer to a person who is soon to be dumped by or is planning to leave their partner. STBX can also be used to refer to anyone in any position who is about to move on (e.g., to resign, be fired or be promoted). For example: "Soon-To-Be Ex" is also abbreviated as STBE.

When I write STBX, I mean this: 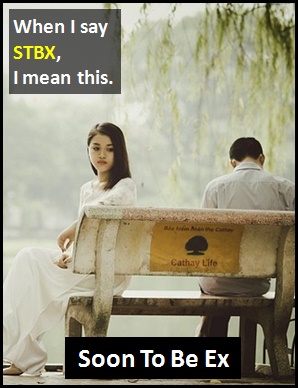 Examples of STBX in Sentences

Here are examples of STBX being used in conversations:

An Academic Look at STBX

Before the digital era, we would have just said "Soon-To-Be Ex" instead of using the abbreviation STBX.

Example of STBX Used in a Text

STBX
Help Us To Improve Cyber Definitions
Please tell us using this form.