What Does SRS Mean?

The abbreviation SRS has more than one meaning. Below we take a look at the three most popular.

On social media and in texts, SRS is most commonly used as a contraction of the word "Serious." In this context, it is often found in terms such as 'SRS BZNS' (Serious business) and 'Y SO SRS?' (Why so serious?).

In motoring, the abbreviation SRS is also used to refer to the airbag system fitted in cars. In this context, SRS means "Supplemental Restraint System." The SRS in a vehicle supplements the seat belt and enhances passenger safety in certain types of collision. The abbreviation SRS can often be seen on the steering wheel or dashboard of a car.

"Sexual Reassignment Surgery" is another common definition for SRS.

"Supplemental Restraint System" is a common definition for SRS in motoring circles.

When I write SRS, I mean this: 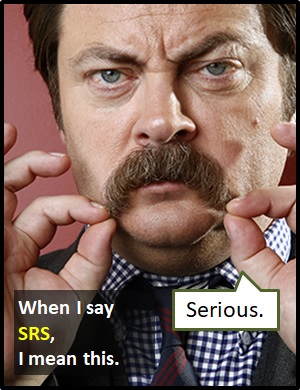 Examples of SRS in Sentences

Here are examples of SRS being used in conversations:

An Academic Look at SRS

Before the digital era, we would have just said "serious" instead of using SRS.

Example of SRS Used in a Text

SRS
Help Us To Improve Cyber Definitions
Please tell us using this form.