What Does SNOG Mean?

SNOG is the term used to describe a long kiss or a period of amorous kissing and cuddling. SNOG is a British slang expression which is fairly similar to the US English phrases "making out" or "tonsil tennis."

The word SNOG has risen in prominence in the UK due to the emergence of the BBC TV show "Snog, Marry, Avoid?" the world's first makeunder show, which sees POD (Personal Overhaul Device) transform over-the-top girls and boys into natural beauties.

When I write SNOG, I mean this: 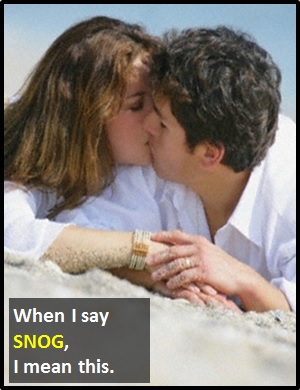 A SNOG is a passionate, amorous kiss.

Examples of SNOG in Sentences

Here is an example of SNOG being used in a conversation:

An Academic Look at SNOG

The word SNOG can be both a noun and a verb. For example:

Example of SNOG Used in a Text

SNOG
Help Us To Improve Cyber Definitions
Please tell us using this form.