What Does SHOOKETH Mean?

The term SHOOKETH is a slang word used to express shock (usually feigned or exaggerated). SHOOKETH became popular in 2017, when it was used by YouTube comedian Christine Sydelko to express her shock at being addressed by name by a cashier.

Here's a clip from the video. (Note: Explicit! The video has been edited to start at the appropriate point.):

When I write SHOOKETH, I mean this: 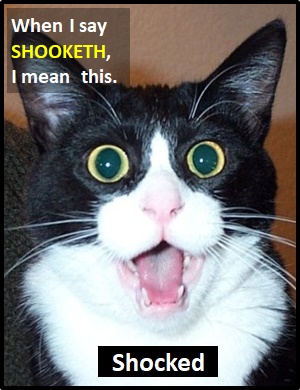 Examples of SHOOKETH in Sentences

Here are examples of SHOOKETH being used in conversation:

An Academic Look at SHOOKETH

SHOOKETH is a slang word. Slang refers to words, phrases and uses of language that are regarded as very informal and which are often restricted to a special context or a particular group of users. It can also be considered a neologism (i.e., a newly coined word or phrase).

Before the digital era, we might have said something like "I'm stunned" or "Blow me down" instead of saying SHOOKETH.

Example of SHOOKETH Used in a Text

SHOOKETH
Help Us To Improve Cyber Definitions
Please tell us using this form.