What Does SHIV Mean?

The word SHIV means a "knife or blade" (often an improvised one). Opinion is divided over the origin of the word. One theory is that SHIV is a derivation of the 17th-Century Romany word "chiv" which meant blade. Another competing theory suggests that SHIV is a modern acronym meaning "Self-Honed Implement of Violence." In this context, a SHIV is usually a homemade stabbing device made from household objects such as toothbrushes or spoons. This improvised style of weapon is commonplace in the prison system.

When I write SHIV, I mean this: 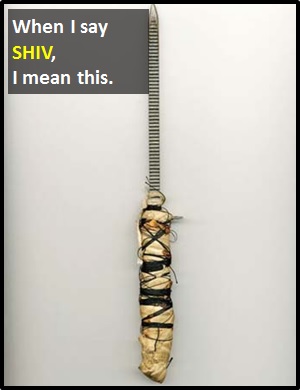 The image shows an improvised weapon known as a SHIV.

Examples of SHIV in Sentences

Here are examples of SHIV being used in a sentence:

An Academic Look at SHIV

SHIV is a noun. If it derives from "Self-Honed Implement of Violence," then it is also an acronym (i.e., an abbreviation spoken like a word). Acronyms differ from initialism abbreviations, which are pronounced using their individual letters.

Example of SHIV Used in a Text

SHIV
Help Us To Improve Cyber Definitions
Please tell us using this form.