The term SELFITIS was first used in 2014, in a spoof article that claimed that the American Psychiatric Association had deemed it a mental health disorder. However, in 2017, a research paper published in the International Journal of Mental Health and Addiction, by Nottingham Trent University in the UK and the Thiagarajar School of Management in India, reported that SELFITIS is a genuine ailment.

The researchers were careful to point out that their results were preliminary and that the subject of SELFITIS requires further research. However, they are certain that the condition exists and have developed a behaviour scale which can be used to assess its severity. The scale was tested using a survey of 400 participants in India, which was chosen as the country has the largest number of Facebook users, as well as the highest number of deaths as a result of trying to take selfies in dangerous locations. As a result of this testing, the researchers identified three levels of SELFITIS: Researchers found that typical SELFITIS sufferers were attention seekers, who were often lacking in self confidence and who were hoping to boost their social standing and feel part of a group by constantly posting images of themselves.

When I write SELFITIS, I mean this: 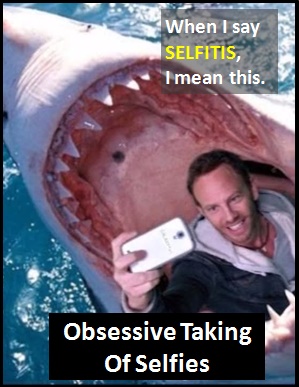 A very bad case of SELFITIS.

Examples of SELFITIS in Sentences

Here are examples of SELFITIS being used in conversations:

An Academic Look at SELFITIS

SELFITIS is a noun (i.e., a naming word). It was officially accepted as a word by the Oxford English Dictionary in 2014.

Before the digital era, selfies didn't exist. However, we might have used words such as "Vain," "Poser," or "Self-Obsessed" to describe the character traits of the type of people who now suffer with SELFITIS.

Example of SELFITIS Used in a Text

SELFITIS
Help Us To Improve Cyber Definitions
Please tell us using this form.