What Does SC Mean?

The abbreviation SC has a number of different meanings, including "Snapchat," "StarCraft," "SimCity," "Silent Chuckle," "Seychelles" and "South Carolina." Here is a little more information about each of these definitions of SC.

SC is most often used on social media, in dating apps (such as Tinder) and in text-messaging to refer to the multimedia messaging app Snapchat. Once seen as an app for under-16s to share pictures and messages that disappeared after viewing, Snapchat has now grown into a worldwide phenomenon, popular with all demographics. According to Snapchat's parent company, Snap.inc., in the first quarter of 2020, Snapchat had 229 million daily active users (an increase of 20% year-over-year) and an average of more than 4 billion "snaps" were created each day.

In gaming circles, the abbreviation SC is often used to refer to the real time strategy game StarCraft and the city-building game Sim City.

SC is used with the meaning "Silent Chuckle" as an expression of amusement. In this context, it may indicate that the sender genuinely found something funny. However, just as with many of the other abbreviations that indicate amusement (e.g., LOL and LOLZ) SC is just as likely to be used sarcastically.

In computing, SC is the Country Code Top-Level Domain (ccTLD) for the Seychelles, an archipelago of 115 islands in the Indian Ocean, off the coast of East Africa. The capital city of the Seychelles is Victoria and the entire population of the archipelago numbers less than 100,000.

When I write SC, I mean this: 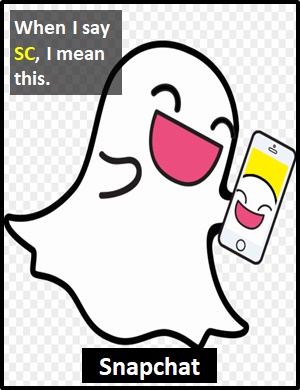 "StarCraft" is a common definition for SC in gaming circles.

"SimCity" is another common definition for SC in gaming circles.

"Silent Chuckle" is another definition for SC.

SC is the Country Code Top-Level Domain for the Seychelles.

SC is also the USPS 2-letter code for South Carolina.

Examples of SC in Sentences

Here are examples of SC being used in conversations:


(Here, SC means "Silent Chuckle" and may be (should be!) being used sarcastically.)

An Academic Look at SC

SC is typically classified as an initialism abbreviation, as it is pronounced using its individual letters (i.e., "Ess See"). (In the case of "Snapchat," the words "Snap" and "Chat" have been merged into one word for stylistic and commercial purposes.)

Example of SC Used in a Text