What Does SBS Mean?

The abbreviation SBS is used to refer to a phenomena in which the users or occupants of a building experience symptoms of ill health that seem to be linked directly to the time spent in the building. No specific illness or cause can be identified and the phenomena may be localized to a particular room or area or may be widespread throughout the building.

In the UK armed forces, the abbreviation SBS is the initials of the "Special Boat Service," the special forces unit of UK's Royal Navy. (The SBS might be considered the UK version of the US Navy Seals.)

In text-based messaging and chats, SBS is also used to mean "Step By Step," (i.e., "in a series of steps or stages"). In this context, SBS is often used to encourage patience in romantic relationships or a meticulous approach in planning, design or construction.

SBS means "Sick Building Syndrome." This is a common definition for SBS.

SBS also means "Special Boat Service." This is another common definition, for SBS, especially in the UK.

When I write SBS, I mean this: 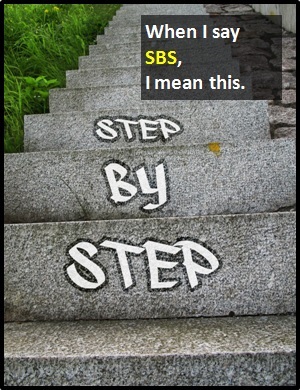 Examples of SBS in Sentences

Here are examples of SBS being used in conversations:

An Academic Look at SBS

As it is pronounced using its individual letters (i.e.,"Ess Bee Ess"), SBS is classified as an initialism abbreviation. Initialisms are different to acronyms, which are spoken like words.

Before the digital era, we might have just said "Sick Building Syndrome" or "Step By Step" instead of using SBS.

The use of the abbreviation SBS to refer to the "Special Boat Service" long pre-dates the digital era.

Example of SBS Used in a Text

SBS
Help Us To Improve Cyber Definitions
Please tell us using this form.