What Does SB Mean?

The abbreviation SB is used with the meaning "Soft Block" to refer to a technique used to remove a follower on Twitter. (See Soft Block.)

SB is widely used with the meaning "Somebody."

SB is also often used to with the meaning "Snapback." On the social media platform Snapchat, it is used when the poster wants another user to respond to a their "Snap" (message). More widely, SB is used to refer to the "Snapback" baseball caps from the New Era Cap Company.

An SB cap has a flat brim and an adjustable strap at the back that snaps together. Popular in the 1980s and 1990s, "Snapbacks" fell out of fashion in the 2000s, but have recently experienced a renaissance.

"Soft Block" is a common definition for SB, especially on Twitter.

"Somebody" is another common definition for SB.

"Snapback" is another definition for SB.

When I write SB, I mean this: 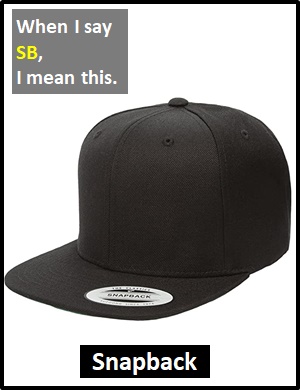 Examples of SB in Sentences

Here are examples of SB being used in conversations:


(Here SB means "Snapback" and refers to the baseball cap.)

An Academic Look at SB

Whether used with the meaning "Soft Block," "Snapback," or "Somebody," SB is classified as an initialism abbreviation, as it is pronounced using its individual letters (i.e., "Ess Bee"). Initialisms are different to acronyms, which are spoken like words.

Example of SB Used in a Text

SB
Help Us To Improve Cyber Definitions
Please tell us using this form.

DAE (does anybody else?) SBF (snapchat best friend) SEP (simplified employee pension, somebody else's problem) SIW (someone is watching) SOMSW (someone over my shoulder watching) Using the music symbols