What Does R&R Mean?

R&R most commonly means "Rest and Recuperation," which is a time period specifically designated to allow recovery after strenuous or relentless activity. For example, soldiers serving on operational tours are often given a period of R&R during their tours and at the end. Of note, R&R is sometimes expanded to "Rest and Relaxation." This meaning has a different connotation as it focuses more on chilling out than essential recovery.

R&R also has the following meanings:

When I write R&R, I mean this: 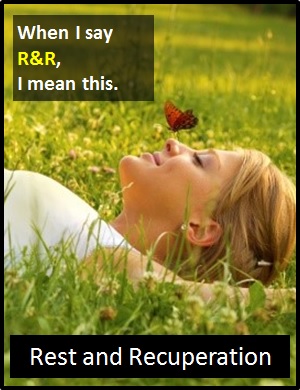 Examples of R&R in Sentences

Here are examples of R&R being used in conversations:

An Academic Look at R&R

Example of R&R Used in a Text

R&R
Help Us To Improve Cyber Definitions
Please tell us using this form.