What Does PWN Mean?

PWN means "To own." The term PWN is believed to have originated from a typing error. (NB: The letters "P" and "O" are adjacent on the keyboard.)

The abbreviation PWN is commonly used on war-game sites. Prior to this, however, it was used by computer hackers who referred "to owning" (i.e., taking control of) a system at its roots. PWN does not mean to own in the possessive sense, but instead to dominate or control a game, object or situation.

When I write PWN, I mean this: 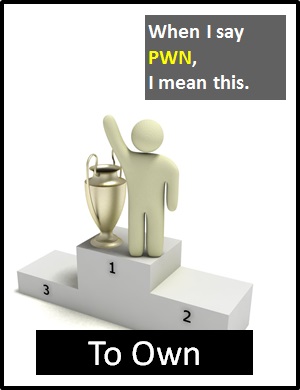 PWN means to own (which is a neologism for to dominate or to have control over).

PWN means "to own" (i.e., to dominate or to control). This is the most common definition for PWN on Snapchat, WhatsApp, Facebook, Instagram, TikTok, and Twitter.

Examples of PWN in Sentences

Here are examples of PWN being used in conversations:

An Academic Look at PWN

PWN is a verb that derives from "to own." There is no commonly accepted pronunciation, although "pawn" and "pone" are the most popular versions.

Example of PWN Used in a Text