What Does POTUS Mean?

POTUS means "President Of The United States." The term POTUS reportedly originated as a Secret Service codename for the President of the United States, but it has been in popular use for decades.

Of note, the Twitter handle @POTUS is the Twitter account for the current serving president. (If the president is a man, his wife is known as FLOTUS (First Lady Of The United States).)

When I write POTUS, I mean this: 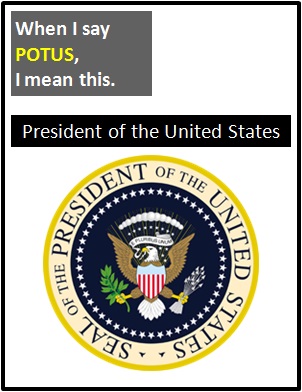 POTUS means "President of the United States." This is the most common meaning for POTUS on social-media platforms such as Twitter, Facebook, and Snapchat.

Examples of POTUS in Sentences

Here are examples of POTUS being used in conversations:

An Academic Look at POTUS

POTUS is an acronym (i.e., an abbreviation spoken like a word). Acronyms differ from initialism abbreviations, which are pronounced using their individual letters.

Example of POTUS Used in a Text