What Does FW Mean?

In internet chat and text messaging, the abbreviation FW is most commonly used with the meaning "F*ck With," as in to mess with, interfere in or make fun of. (See also FWU and FWY, both of which mean "F*cking With you.")

More generally, FW is used with the meaning "Forward" to indicate that a text or message has been forwarded from another sender. FW is usually included in the subject line of a message, often automatically. It can also be used within the text of a message, as an instruction to pass a message on, or as a simple abbreviation of the word "Forward."

In this context, "Forward" is also often abbreviated as FWD.

The abbreviation FW was also widely used to refer to "Frederik Willem de Klerk," the 7th and last President of apartheid-era South Africa. During his time in office (1989-1994), FW de Klerk was responsible for securing the release of imprisoned black activist Nelson Mandela and he was widely credited with bringing the apartheid system to an end. FW de Klerk and Nelson Mandela were jointly awarded the Nobel Peace Prize in 1993.

"Forward" is also a common definition for FW.

"Frederik Willem de Klerk" is another definion of FW:

When I write FW, I mean this: 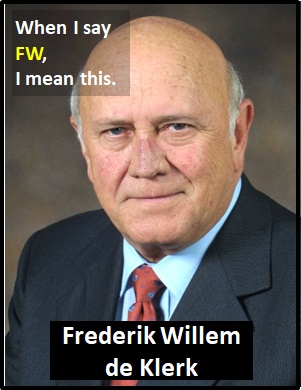 Examples of FW in Sentences

Here are examples of FW being used in conversations:

(Here, FW is being used with the meaning "F*ck With.")

An Academic Look at FW

FW is an initialism abbreviation. Technically, this means it is pronounced using its individual letters (i.e., Eff Dublyu). However, it is not usually spoken using its letters (unless referring to Frederik Willem de Klerk). The abbreviation FW is generally used for efficiency in writing and not efficiency in speech.

Example of FW Used in a Text

FW
Help Us To Improve Cyber Definitions
Please tell us using this form.