What Does PHAT Mean?

PHAT means "Pretty, Hot And Tempting" and "Cool or Great."

The slang word PHAT is an acronym meaning "Pretty, Hot And Tempting." Whilst it is considered by some men to be a positive way to describe a woman, its use may not always be considered a compliment by the woman in question. In essence, PHAT is a play on the word "fat."

The term PHAT gained popularity in the 1990s and early 2000s, as a way to compliment a woman. Since then, its popularity has fallen. PHAT is similar in meaning to abbreviations such as LUSH, HOT, and REEM.

PHAT is also used as an alternative to the words "Cool or Great." In this context, PHAT typically expresses admiration of an object, rather than for a person (e.g., "A PHAT jacket," "A PHAT bracelet," or "A PHAT Chinese curry with rice," rather than "A PHAT dude.")

When I write PHAT, I mean this: 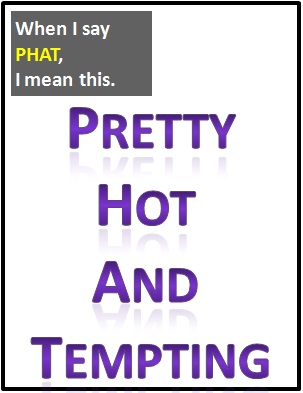 PHAT means "Pretty, Hot And Tempting." This is the most common meaning for PHAT on social-media platforms such as Twitter, Facebook, and Snapchat.

Examples of PHAT in Sentences

Here are examples of PHAT being used in conversations:

An Academic Look at PHAT

PHAT is an acronym (i.e., an abbreviation spoken like a word). Acronyms differ from initialism abbreviations, which are pronounced using their individual letters.

Example of PHAT Used in a Text