What Does OC Mean?

The abbreviation OC is often used with the meaning "Of Course" to indicate agreement.

In military circles, the abbreviation OC is used with the meaning "Officer Commanding." In the army, an officer in command of a grouping such as a platoon or company would usually be referred to as the OC, whilst the abbreviation CO (Commanding Officer), is normally used to refer to commanders of battalions or regiments.

In fanfiction, OC stands for "Original Character." In this context, an OC is a character created by an author or roleplayer, that does not belong to the canon cast, but is unofficially introduced into a story.

OC is also used to mean "Original Content." In this context, OC refers to material that has been created by the publisher (e.g., an internet meme, music, song lyrics).

"The O.C." ("The Orange County") was the title of a TV series set in Newport Beach, Orange County, California. The series, which aired from 2003 to 2007, was about the relationships between the affluent teenage residents of the seaside city.

OC also means "Officer Commanding." This is the most common definition for OC in military circles.

OC also means "Original Character." This is a common definition for OC in fanfiction.

When I write OC, I mean this: 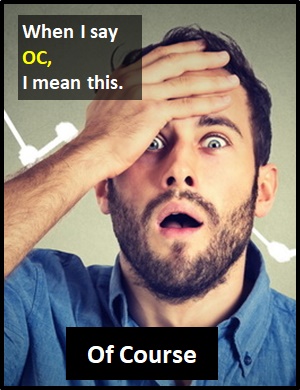 Examples of OC in Sentences

Here are examples of OC being used in conversations:

An Academic Look at OC

As it is pronounced using its individual letters (i.e., "Oh See"), OC is an initialism abbreviation. Initialisms are different to acronyms, which are spoken like words.

Example of OC Used in a Text

OC
Help Us To Improve Cyber Definitions
Please tell us using this form.