What Does NBD Mean?

NBD (No Big Deal) is typically used as a response to:

NBD can also be used as a postamble to a statement as a declaration of false modesty, in which case, it means "it's all in a day's work" (i.e. that's normal for me).

When I write NBD, I mean this: 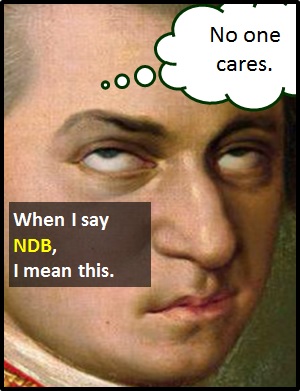 Examples of NBD in Sentences

Here are examples of IRL being used in sentences:

(Here, NBD means "that's not as special as you think it is.")

An Academic Look at NBD

NBD is most commonly used as a standalone declarative sentence (i.e., a statement), meaning "It is no big deal." When it is used in a wider sentence, NBD is used as a noun. (NB: When NBD is expanded, it is a noun phrase based on the common noun Deal. The words No and Big are adjectives modifying Deal.)

NBD is an initialism abbreviation. This means it is pronounced using its individual letters (i.e., En Bee Dee). Initialisms contrast with acronyms, which are spoken like words.

Before the digital era, we might have written something like "Isn't that the norm?" instead of NBD.

Example of NBD Used in a Text

NBD
Help Us To Improve Cyber Definitions
Please tell us using this form.