What Does MINECRAFT Mean?

MINECRAFT is a "Popular Open-World Game."

MINECRAFT is a sandbox video game developed by Mojang. The game was created by Markus "Notch" Persson in 2009. MINECRAFT has won several awards and is considered one of the greatest video games ever produced. As at March 2021, MINECRAFT is the best-selling video game of all time.

MINECRAFT is a portmanteau word, formed by merging the words mine and craft. The game allows players to explore, interact with, and modify a dynamically-generated map made of one-cubic-meter-sized blocks. In addition to blocks, the environment features plants, crops, mobs and many other items. Game activities include mining for ore, fighting hostile mobs, and crafting new blocks and tools by gathering various resources.

When I write MINECRAFT, I mean this: 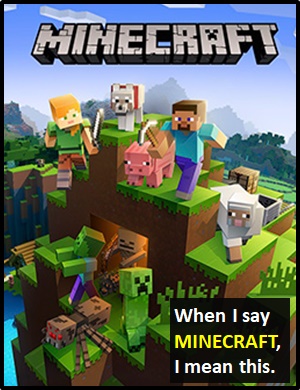 MINECRAFT is one of the most well-known video games in the world.

Example of MINECRAFT Used in a Text

MINECRAFT
Help Us To Improve Cyber Definitions
Please tell us using this form.