What Does MEH Mean?

MEH is an expression of indifference or disdain.

The expression MEH (pronounced like "mare") is an expression of complete indifference or disdain. It is a verbal shrug of the shoulders, similar to expressions such as "whatever."

MEH is typically used in response to a question or statement. It shows disinterest or disapproval and is rarely accompanied by further explanation, as the speaker (or sender) is not interested or engaged enough in the conversation to "waste" more words on the subject that has been mentioned. For example: The origins of MEH are not clear, but it's current popularity is credited to the writers of the Simpsons, who included the expression in various episodes of the show.

In December 2009, BBC News produced a "portrait" of the first decade of the twenty-first century, which included MEH as one of the top twenty words that defined the noughties/aughts.

When I write MEH, I mean this: 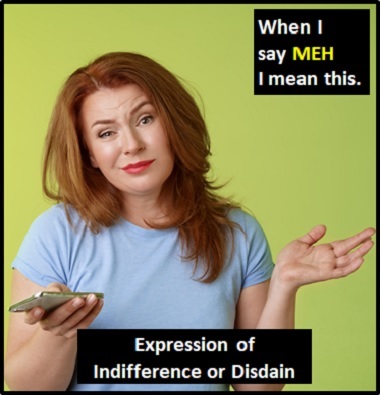 MEH is a verbal shrug of the shoulders.

An Academic Look at MEH

MEH is typically used an interjection. An interjection is used to express a sentiment such as indifference or disdain (as well as surprise, irritation, disgust, joy, excitement, or enthusiasm).

Example of MEH Used in a Text

MEH
Help Us To Improve Cyber Definitions
Please tell us using this form.