What Does KPC Mean?

KPC means "Keep Parents Clueless." The abbreviation KPC is commonly used during text or chat conversations between children or teenagers who are undertaking or planning an activity (online or offline) that they wish to keep secret from adults. (For example, planning a party, playing online games instead of doing homework, engaging in dating-style chat, etc.)

KPC might also be used by an older person "grooming" a youngster online.

When I write KPC, I mean this: 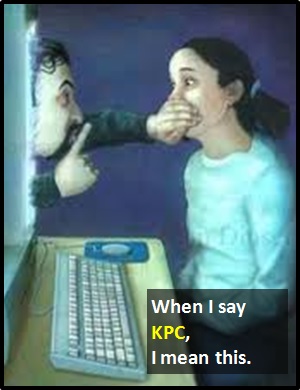 Examples of KPC in Sentences

Here are examples of KPC being used in conversations:

An Academic Look at KPC

KPC is an initialism abbreviation. Technically, this means it is pronounced using its individual letters (i.e., Kay Pee Cee), but as this is harder to say than "Keep Parents Clueless," it is not often uttered using its letters. In other words, the abbreviation KPC is for efficiency in writing and not efficiency in speech.

Before the digital era, we might have said something like "Don't tell your parents" instead of using KPC.

Example of KPC Used in a Text

KPC
Help Us To Improve Cyber Definitions
Please tell us using this form.