What Does KK Mean?

The abbreviation KK is a short form of the expression "Okay," used to acknowledge a message and indicate that it has been understood. KK is widely considered a safe or neutral way of acknowledging a message. It is less formal that typing out the complete word "Okay" and less brusque than a single letter K.

Other ways of saying OK, include: The use of KK probably results from the fact that it is very easy to type. According to some sources, it may have derived from the expression "K Kewl" (meaning "OK, Cool"). It may also have originated from Morse Code (a communications system developed in the 1800s), where the letters KK mean "End of message."

Of note, the abbreviation KK is also the Korean equivalent to texting LOL (Laughing Out Loud) in English. As with LOL there are variations, but generally, more Ks indicate harder or louder laughter.

When I write KK, I mean this: 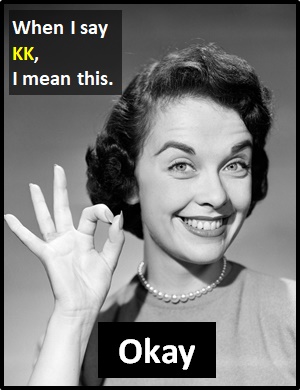 KK is one of many ways to say "Okay."

Examples of KK in Sentences

Here are examples of KK being used in conversations:

An Academic Look at KK

As it is pronounced using its individual letters (i.e., "Kay Kay"), KK is classified as an initialism abbreviation. Initialisms are different to acronyms, which are spoken like words.

KK is typically used as a standalone declarative sentence (i.e., a statement). It is not normally used as another part of speech within a wider sentence.

Before the digital era, we would probably have just said "Okay" instead of using the abbreviation KK.

Example of KK Used in a Text