What Does JELLO Mean?

JELLO means "Jealous". A number of shortened versions of the word jealous have gained popularity due to popular reality TV shows (most notably TOWIE, The Only Way is Essex).

Other versions are JELLY, JEL, and JEAL.

JELLO means "Jealous". This is the most common meaning for JELLO on social-media platforms such as Twitter, Facebook, and Snapchat.

When I write JELLO, I mean this: 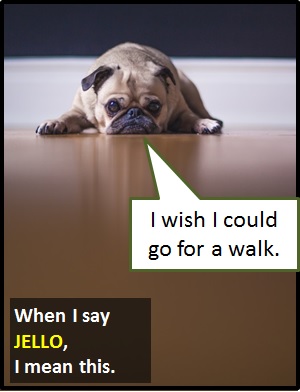 I am very jealous.

Examples of JELLO in Sentences

Here are examples of JELLO being used in conversations:

An Academic Look at JELLO

JELLO is typically used as an adjective (i.e., a describing word). For example:

(Here, the adjective JELLO modifies the noun she.)

Before the digital era, we would have just said "jealous" instead of "JELLO".

Example of JELLO Used in a Text