What Does JEL Mean?

JEL (jealous or jealousy) is typically used in response to hearing positive news from a colleague. It denotes a state of envy for the originator's good news. The term "WELL JEL" (meaning very jealous or very envious) has become common in the United Kingdom due its widespread use in the TV series "The Only Way Is Essex" (TOWIE).

When I write JEL, I mean this: 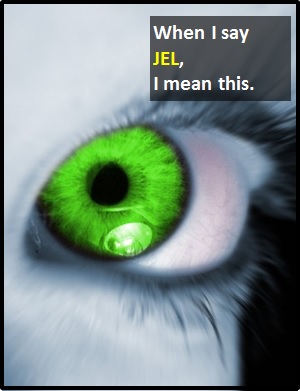 Jealousy is often described as the green-eyed monster.

Examples of JEL in Sentences

Here is an example of JEL being used in a sentence:

An Academic Look at JEL

JEL is a shortened version of jealous and is therefore a contraction. Of interest, the word jealousy is meant to describe a situation involving an attack by a third party on something we already own (usually a relationship). It is meant to be distinct from envy which describes wanting to have something owned by someone else (usually a possession or a trait). For example:

Technically speaking, JEL is most commonly used to mean envious as opposed to jealous. However, the distinction between envy and jealousy is disappearing fast. Therefore, it is safe to assume that JEL can mean envious/envy or jealous/jealousy.

Example of JEL Used in a Text