What Does IHU Mean?

The abbreviation IHU is typically used with the meaning "I Hate You" to express feelings of intense dislike. However, IHU can also be used ironically. In such cases it is often used in response to someone’s good fortune, expressing good-natured jealousy rather than actual dislike. For example:

"I Hate You" can also be abbreviated as IHY and IH8U.

When I write IHU, I mean this: 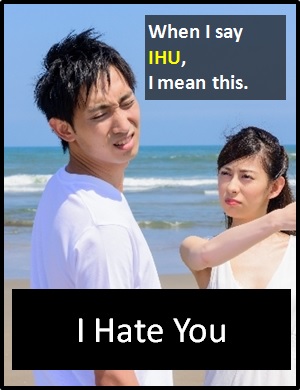 IHU doesn't always have to be so hurtful.

Examples of IHU in Sentences

Here are examples of IHU being used in conversations:

An Academic Look at IHU

The abbreviation IHU is typically used as a standalone declarative sentence (i.e., a statement). In other words, it is not normally used as another part of speech within a wider sentence.

Before the digital era, we might have said something like "You're Horrible" or even just "I Hate You" instead of using IHU.

Example of IHU Used in a Text

IHU
Help Us To Improve Cyber Definitions
Please tell us using this form.