What Does HYNA Mean?

HYNA means "Girl." It may also be a Misspelling of "HYUNA" (South Korean singer-songwriter). Here is more information about the meaning of HYNA. (Examples of use can be found below.)

HYNA is a slang word used widely in the US Latino community to refer to a "Girl." It is an Anglicization of the Latin-American Spanish word "Jaina."

Although it can be considered a sexist and derogatory term, many gang-affiliated girls proudly refer to themselves as HYNA, and the HYNA look (i.e., makeup and clothing) is being noticed by the fashion industry.

HYNA is also often typed in search engines as a misspelling of the name of South Korean singer-songwriter Kim Hyun-ah, better known as HYUNA.

HYNA is also a misspelling of the name of South Korean singer-songwriter "HYUNA."

When I write HYNA, I mean this: 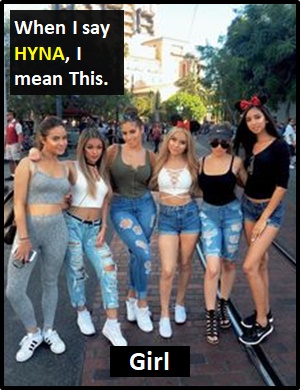 Examples of HYNA in Sentences

Here are examples of HYNA being used in conversations with the meaning "Girl":

An Academic Look at HYNA

When used to mean girl, HYNA is a slang word. Slang refers to words, phrases and uses of language that are regarded as very informal and which are often restricted to a special context or a particular group of users.

When used to mean HYUNA, HYNA is a straightforward misspelling of the artist's stage name.

Example of HYNA Used in a Text

HYNA
Help Us To Improve Cyber Definitions
Please tell us using this form.