What Does HUH Mean?

HUH is typically used as a slang word, with the meaning "I am Confused or Surprised" or "Do you Understand?". It can also mean "Heels Up Harris." Here's more information about these definitions of HUH.

HUH is most often used to express surprise, disbelief, contempt or a lack of understanding. When placed at the end of a sentence, HUH typically serves as a (usually rhetorical) question or is used to confirm that what has been said has been understood.

In 2020, rapper Eladio Carrión had a hit with a song entitled HUH, taken from the Sauce Boyz album.

In August 2020, HUH was adopted by some Republican voters as a derogatory nickname for Democratic party vice-presidential nominee Kamala Harris. In this context, HUH means "Heels Up Harris" and probably refers to an affair that the then 29-year-old Harris had with San Francisco politician Willie Brown in the 1990s.

HUH also means "Do you Understand?"

Amongst some supporters of the Republican Party HUH also means "Heels Up Harris."

When I write HUH, I mean this: 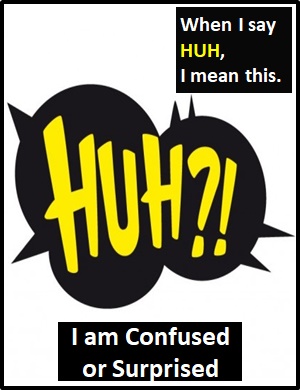 HUH can also mean "Do you Understand?" and "Heels Up Harris."

Examples of HUH in Sentences

Here's an example of HUH being used in conversation:


(Here HUH expresses surprise and disbelief, as well serving as a rhetorical question.)

An Academic Look at HUH

HUH is typically used as a slang word. Slang refers to words, phrases and uses of language that are regarded as very informal and which are often restricted to a special context or a particular group of users.

HUH often serves as an interjection. An interjection is included in a sentence to express a sentiment such as surprise or irritation (as well as disgust, joy, excitement, or enthusiasm). HUH also often plays the role of an interrogative sentence (i.e., a question). However, even when used as a question, it is commonly seen without a question mark (i.e., it can be typed "HUH?" or "HUH").

When used with the meaning "Heels Up Harris," HUH is classified as an initialism abbreviation. Initialisms are different to acronyms, which are spoken like words.

Example of HUH Used in a Text

HUH
Help Us To Improve Cyber Definitions
Please tell us using this form.