What Does HQ Mean?

HQ means "High Quality" and "Headquarters." Here is more information about the abbreviation HQ. Examples of use can be found below.

HQ is typically used in text-based communications to indicate that something is of "High Quality."

HQ is widely used, both in text and speech, to mean "Headquarters." In this context, HQ refers to the main center of control of an organization, business or operation.

When I write HQ, I mean this: 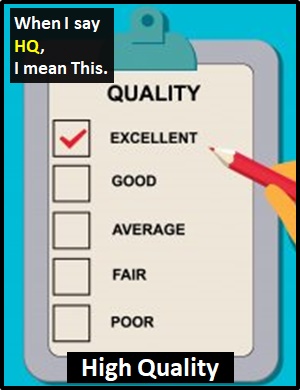 Examples of HQ in Sentences

Here are examples of HQ being used in conversations:

An Academic Look at HQ

When used with the meaning "Headquarters," the abbreviation HQ is a noun (i.e., a part of speech that denotes a person, animal, place, thing, or idea).

When used with the meaning "High Quality," HQ is an adjective (i.e., a describing word). For example:

Before the digital era, we might have said something like "First Class" instead of using HQ to mean "High Quality."

Example of HQ Used in a Text

HQ
Help Us To Improve Cyber Definitions
Please tell us using this form.