What Does HENCH Mean?

The word HENCH describes someone (typically a man) who is large, fit, and muscular.

The origin of the word HENCH is under debate. The most common theory is that it derives from the word henchman.

Henchman originates from the Old English word "hengest" (male horse). A henchman was someone who looked after his master's horses (i.e., a squire). Later, the word developed to mean "a faithful follower or political supporter, especially one prepared to engage in crime or violence by way of service." As a squire or someone prepared to engage in violence is likely to be fairly butch, it is feasible that henchman is the origin of the adjective HENCH (meaning large, fit, and muscular).

Another theory is that HENCH was born spontaneously, and it derives its sound from an amalgam of words like hunky, butch, and bench; i.e., it just sounds like it should mean large, fit, and muscular.

When I write HENCH, I mean this: 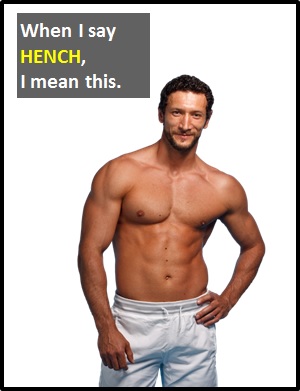 Hench means fit and muscular. It possibly derives from the word henchman.

Examples of HENCH in Sentences

Here are examples of HENCH being used in sentences:

(HENCH can also be used figuratively.)

An Academic Look at HENCH

Example of HENCH Used in a Text

HENCH
Help Us To Improve Cyber Definitions
Please tell us using this form.