What Does GWP Mean?

A GWP (Gift With Purchase) is an item intended as a free gift with a larger purchase. GWPs are typically sample-sized products offered by large retailers in the cosmetics and beauty industries.

Once a retailer has finished sending out GWPs as part of its promotion, smaller retailers will buy up the remaining GWP samples to sell on sites like eBay.

When I write GWP, I mean this: 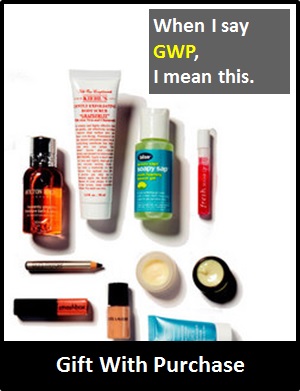 A GWP product is usually a sample offered as a free gift with a purchase.

Examples of GWP in Sentences

Here is an example of GWP being used in an advertisement:

An Academic Look at GWP

When expanded fully, GWP is a noun phrase. However, it can be used as a noun or an adjective. For example:

As it is pronounced using its individual letters (i.e., "Gee Dublyu Pee"), GWP is classified as an initialism abbreviation. (Initialisms are different to acronyms, which are spoken like words.)

Example of GWP Used in a Text

GWP
Help Us To Improve Cyber Definitions
Please tell us using this form.