What Does GSH Mean?

GSH (Good Sense of Humor/Humour) is used by people on dating sites to describe themselves as witty and entertaining. GSH is used as an alternative to GSOH to differentiate it from "Good Salary, Own Home," which has become an alternative meaning for GSOH. Experienced online daters will tell you that a claim of a GSH gives no clue to a person's ability to be witty or to entertain as most people believe themselves to have a good sense of humor/humour.

Of interest, dating sites are full of specialist abbreviations, which originate from a time when personal ads featured in local newspapers and users were charged by the word. (A term like GSH would incur a fee for just one word as opposed to four words.)

GSH means "Good Sense of Humour (see also GSOH)". This is the most common definition for GSH on online dating sites, such as Craigslist, Tinder, Zoosk and Match.com, as well as in texts and on adult chat forums.

When I write GSH, I mean this: 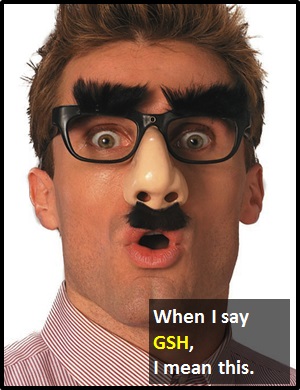 Examples of GSH in Sentences

Here is an example of GSH being used in a sentence:

An Academic Look at GSH

GSH is typically seen as an entry in list of personal attributes. When used in a full sentence, GSH is used like a noun. Of note, GSOH is an initialism abbreviation. This means it is pronounced using its individual letters (i.e., Gee Ess Aich). (Initialisms contrast with acronyms, which are spoken like words.)

Before the digital era, we might have said something like "witty" or "a little bit barmy" instead of GSH.

Example of GSH Used in a Text

GSH
Help Us To Improve Cyber Definitions
Please tell us using this form.