What Does FYEO Mean?

FYEO means "For Your Eyes Only." The abbreviation FYEO is used in internet and text chat to mean "For Your Eyes Only." It indicates that what the sender is about to share is only meant to be seen by the recipient and should not be shared further. FYEO often precedes the sharing of "juicy gossip" or explicit photos.

When I write FYEO, I mean this: 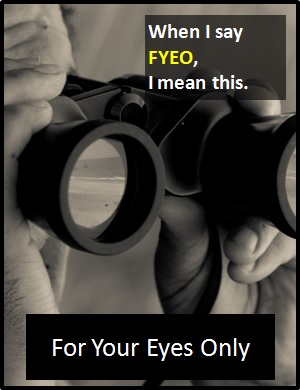 FYEO means something is for you, and only you, to see.

Examples of FYEO in Sentences

Here are examples of FYEO being used in conversations:

An Academic Look at FYEO

As it is pronounced using its individual letters (i.e., "Eff Why Ee Oh"), FYEO is classified as an initialism abbreviation. Initialisms are different to acronyms, which are spoken like words.

Before the digital era, we would have said something like "This is between you and me" instead of using FYEO.

Example of FYEO Used in a Text

FYEO
Help Us To Improve Cyber Definitions
Please tell us using this form.