What Does FTW Mean?

The abbreviation FTW is widely used with the meaning "For the Win." It is also sometimes used to mean "F*ck the World." Here is more information about each of these definitions of FTW.

FTW It is typically used with the meaning "For The Win" as an expression of excitement, to add emphasis to the end of a comment or message.

The phrase "For The Win" is thought to have originated on the television game show Hollywood Squares. On the show, contestants would choose their final winning move by saying something like "I'll take David Hasselhoff for the win!".

In gaming, FTW is often used when a player is about to achieve or has achieved some sort of success, such as winning a game, killing or wounding an opponent, or completing a complex task. For example:

The term "For the Win" comes from the game show Hollywood Squares.

When used to mean "F*ck the World," FTW is typically used as an expression of disenchantment with life in general or with a particular situation. For example:

Here's a short video explaining how to use FTW:

"For the Win" is the most common definition for FTW in gaming related communications on apps such as Discord, TeamSpeak and Telegram, as well as on Snapchat, WhatsApp, Facebook, Twitter, and Instagram.

"F*ck the World" is another definition of FTW.

When I write FTW, I mean this: 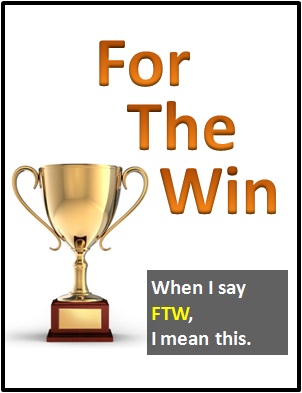 An Academic Look at FTW

As it is pronounced using its individual letters (i.e., "Eff Tee DoubleYoo"), FTW is classified as an initialism abbreviation. Initialisms are different to acronyms, which are spoken like words.

Example of FTW Used in a Text

FTW
Help Us To Improve Cyber Definitions
Please tell us using this form.