What Does 4TW Mean?

4TW means "For the Win." The abbreviation 4TW is a cyber term meaning "For The Win." It is normally used in internet chat forums, online gaming and text messages as a way of expressing excitement or enthusiasm.

FTW is typically used at the end of a comment. It is usually meant to express genuine enthusiasm, but can also be used sarcastically.

Of note, 4TW can also be written as FTW.

When I write 4TW, I mean this: 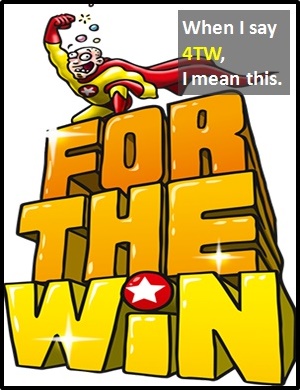 Examples of 4TW in Sentences

Here are examples of 4TW being used in conversations:

[In this conversation, 4TW is being used to express genuine enthusiasm and excitement.]

[In this conversation, 4TW is being used sarcastically.]

An Academic Look at 4TW

4TW is classified as a cyber term as opposed to an initialism abbreviation or an acronym. Initially, cyber term terms were introduced for brevity, but, particularly with the advent of predictive texting and on-screen keyboards, they are now mostly employed for fun. Cyber terms differ from icons because they are not pictorial representations.

4TW is an interjection. An interjection is not grammatically related to any other part of the sentence. It is included in a sentence to express a sentiment such as surprise, disgust, joy, excitement, or enthusiasm.

Before the digital era, we would have just said "For The Win" instead of using the abbreviation 4TW.

Example of 4TW Used in a Text

4TW
Help Us To Improve Cyber Definitions
Please tell us using this form.